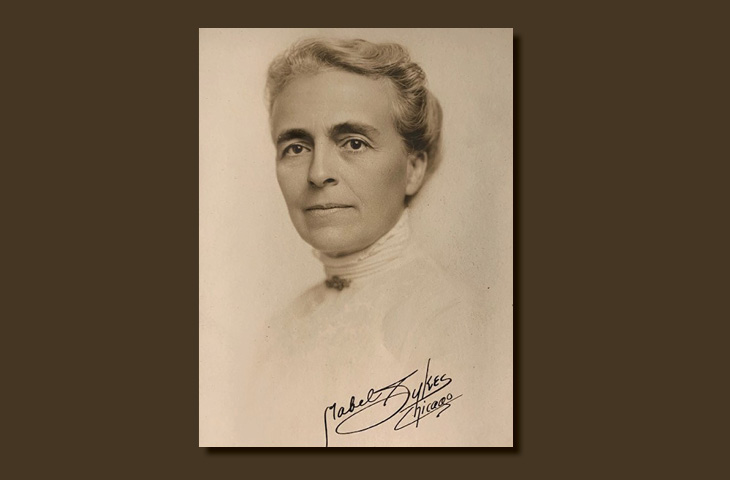 A central question in a democracy is who has the right to vote. Voting rights were not guaranteed to all American citizens in the past and are still an evolving and even controversial issue today.

Throughout American history individuals have banded together to fight for or to protect their voting rights. Suffragists were the activists in the 19th and early 20th centuries who fought to secure voting rights for women.

Suffragists were political thinkers and strategists. They deployed many different tactics to gain public attention for their cause, and they created many different arguments to persuade others to join them.

Evanston women were at the forefront of the intellectual and strategic battle for women’s suffrage. One important leader who called Evanston home was attorney Catharine Waugh McCulloch.

Catharine Waugh McCulloch was born in 1862 in New York and came to Illinois as a child. She grew up near Rockford where she attended Rockford Female Seminary and then received her law degree from Union College of Law in Chicago in 1886. She married Frank McCulloch and moved to Evanston in 1890.

After Catharine had trouble getting a position as an attorney, the couple started their own law firm. The McCulloch’s firm focused on assisting women with problems related to their lack of legal status: wage discrimination, divorce, probate, child custody, and spousal abuse. Through representing women with these issues, she emerged as a leading figure among the advocates for women’s rights in the state and a leading advocate of women’s suffrage.

Throughout her life, McCulloch wrote and lectured extensively on women’s issues. Through her arguments on the printed page and in the courtroom, McCulloch significantly contributed to the women’s suffrage movement both in Illinois and nationally. McCulloch drafted the legislation for Illinois women to get the vote in 1893 and carried it every year to the legislature for 20 years until its passage in 1913.

Most significantly, McCulloch created the strategy of working for partial suffrage in Illinois – seeking access to those elections not constitutionally limited to men – which included some municipal and township offices, and presidential electors.

McCulloch was the first woman in Illinois to serve as Justice of the Peace, from 1907-1913. She also served as legal counsel for the WCTU and for the National American Woman’s Suffrage Association.

In 2021, a marker on the National Votes for Women Trail was dedicated to McCulloch in the park named for her in Evanston. The Evanston Women’s History Project at the Evanston History Center led the local project with EWHP Director Lori Osborne as Illinois coordinator. The League of Women Voters of Illinois and Evanston were key participants, along with many Evanston-based nonprofits and organizations.

Further information can be found here: